Final Fantasy VII a very good game in its own right still very popular today. To tell the truth I've been dreading doing this one because it is the most misprinted games in the ps1 library. I figured it was about time. Final Fantasy VII has errors crossing over with other errors and is confusing to make sense of it. So let's get started with the black label errors. 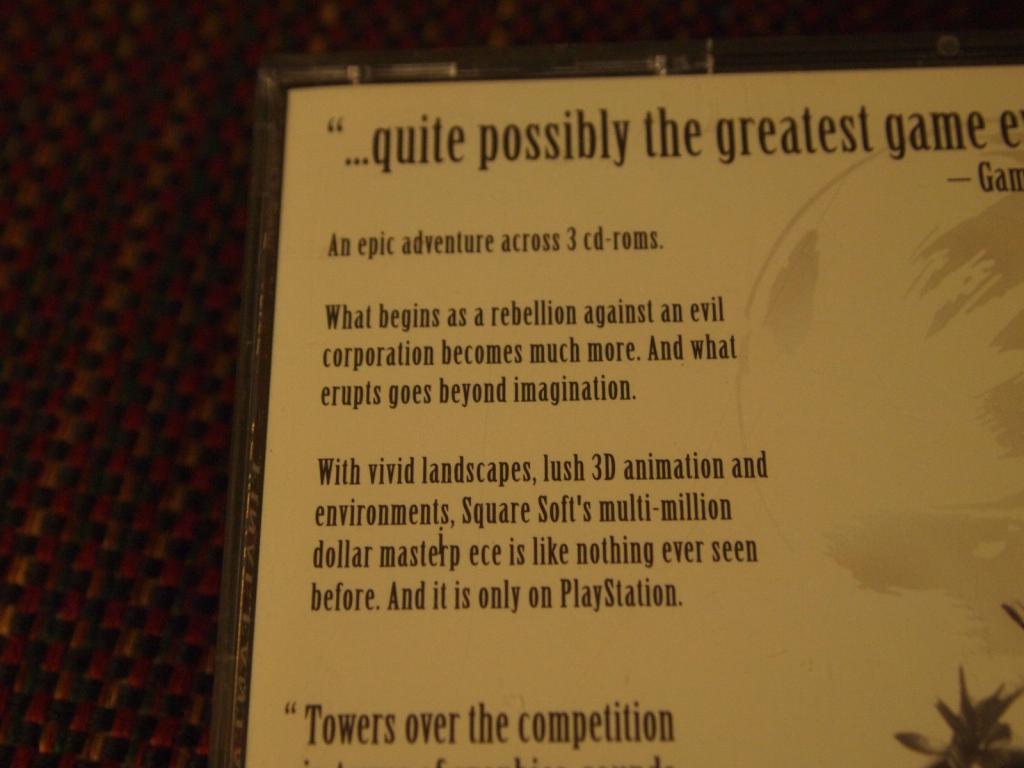 First we have here is the masterpiece misprint which shoes a misplaced I from the word masterpiece. It's my opinion that the I was a typo fix but placed on the wrong layer once the ratings box was expanded and pictures altered the I raised up and moved this misprint is relatively common and it hold no real premium over the other version. 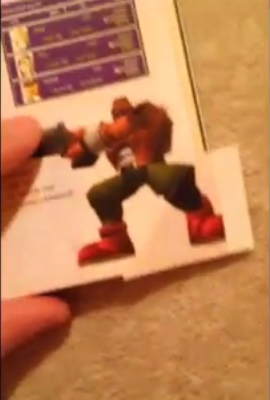 Next up is an error that happened to the masterpiece version of the game this is what is called a fold over error it happens when a piece of the page ends up getting folded when the page is being trimmed something like this is very rare but has happened to other games. 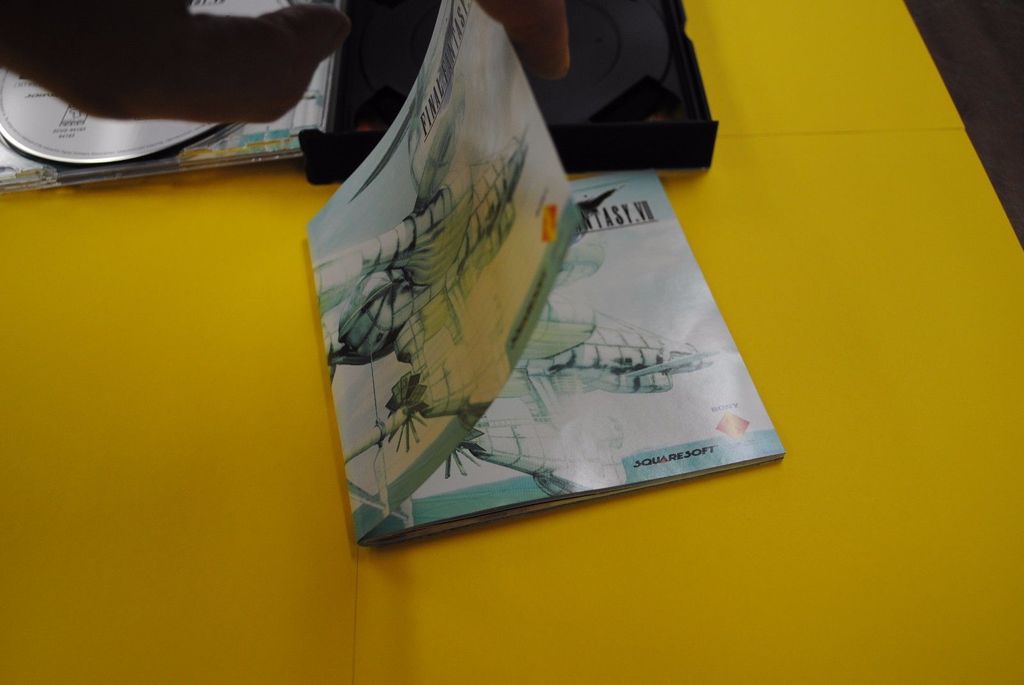 Now another manual error two covers have been added to the manual once again I'm unsure of what case this particular error came with. This type of error is most likely is pretty rare or even a one of a kind. 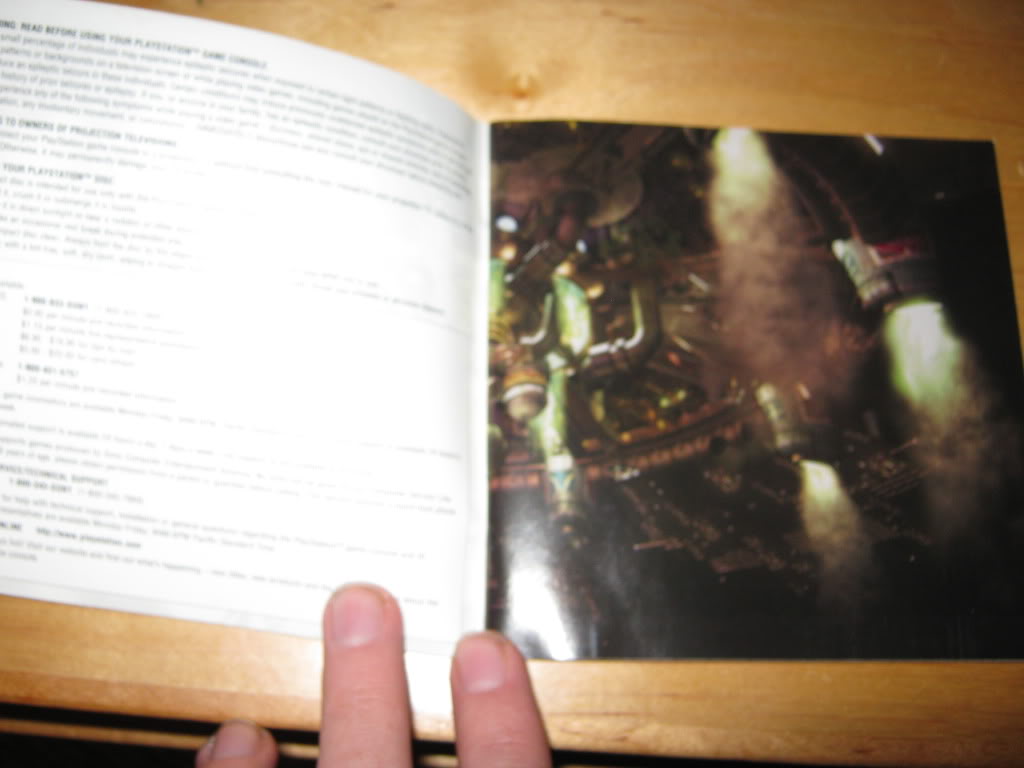 Here is yet another manual error this one the second page was invered. 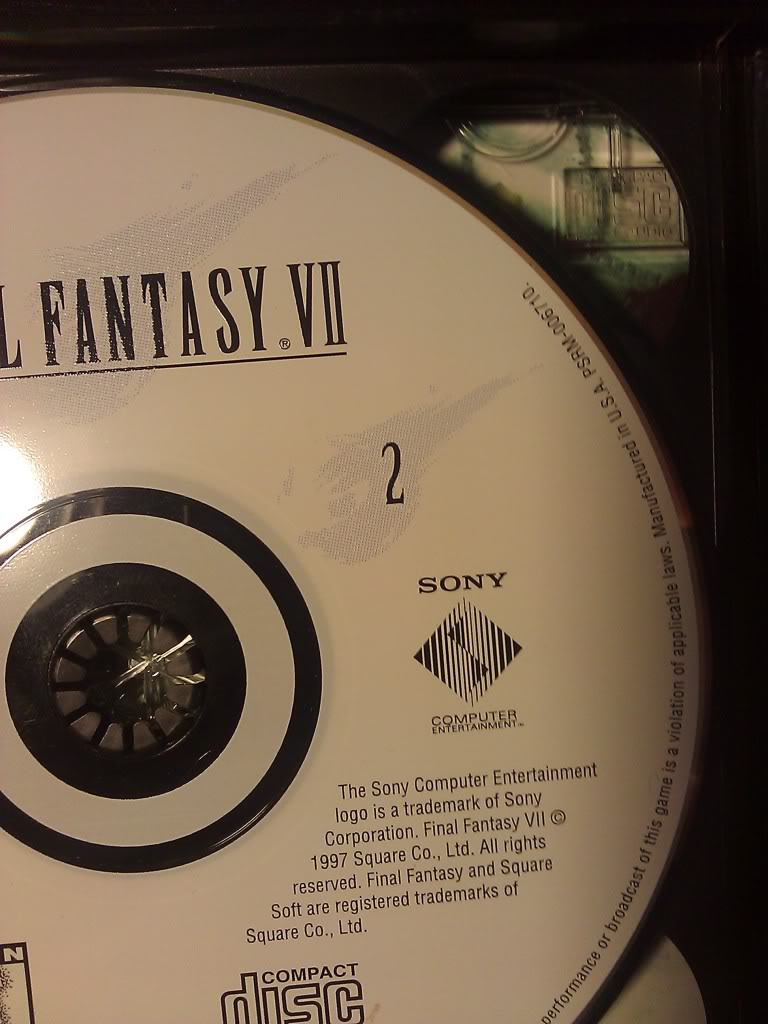 Now onto the next I'm uncertain where this falls but behind the 2 on disc 2 should be a small picture of the Highwind and not the comet. My thinking on this one is that they were producing multiple discs from the same printer went from printing disc 3 to disc 2 changed over everything but the small picture. There are multiple of this error out there but it seems harder to track down. 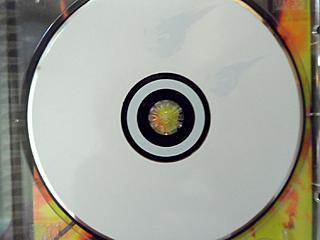 Up next is an error which seems pretty rare too the disc is disc 3 and is missing its black ink. What happened here where the discs were being labeled the black ink was shut off and didn't print on the discs. As a bit of a side note there is a recently documented disc variant for this game where a different type of disc was used. Maybe the changed disc type was to correct this particular error which would place it with the masterpiece misprint.

We are not finished yet now onto the greatest hits errors all GH cases have a typo on the back saying 1 memory card blocks. 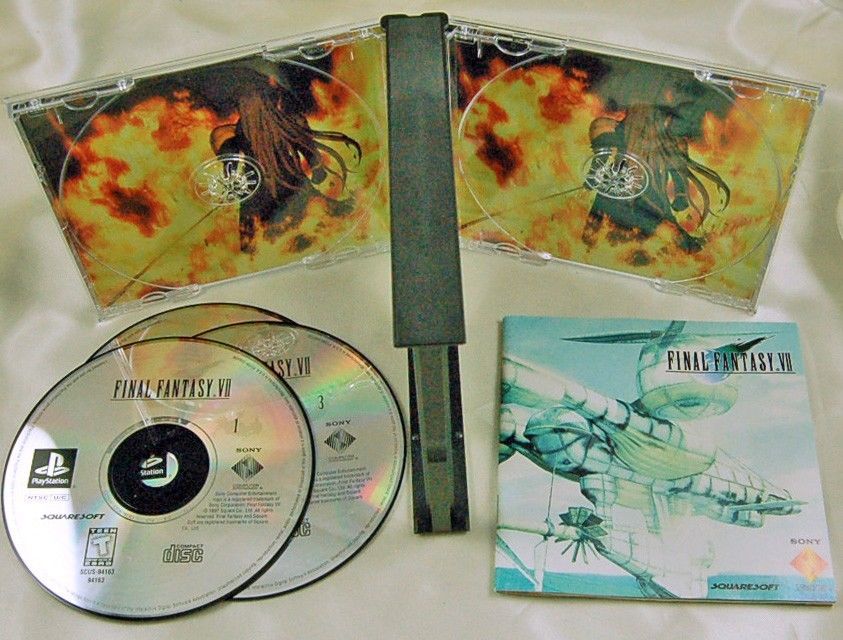 What we have here is a fairly common misprint on the case Sephiroth is shown on both sides of the case. This error is the second most common error with this game. It most likely occurred because the printing the cases failed to notice they had the wrong pictures for the back of the insert. 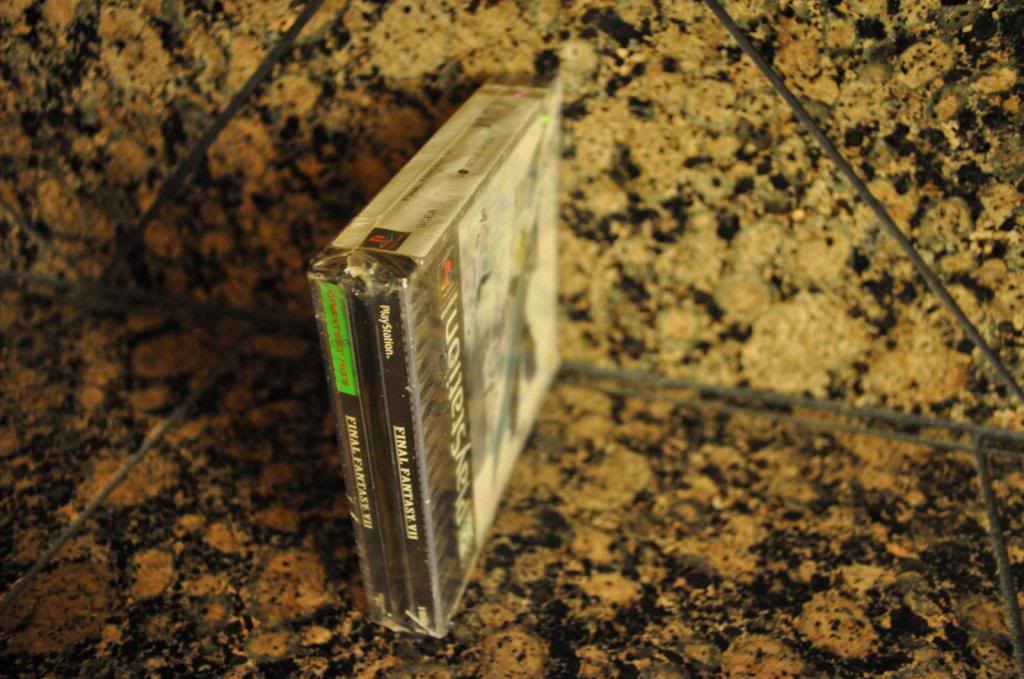 This next one the is quite possibly one of the more weird error. It has the rear insert and discs are greatest hits while the front is a black label cover. There is one theory as to why this happened people seem to think that it was a transitional piece meaning it was made with extra black label covers, but seeing as how this never happened to another game and i would hope all cases are made with both front and back insert printed in pairs i have a hard time believing it. My theory is that this was made in response to the double Sephiroth error it was made to fix the error but they didn't realize they picked the black label template. This error is pretty rare and only sealed ones really count because this error can be assembled by hand. 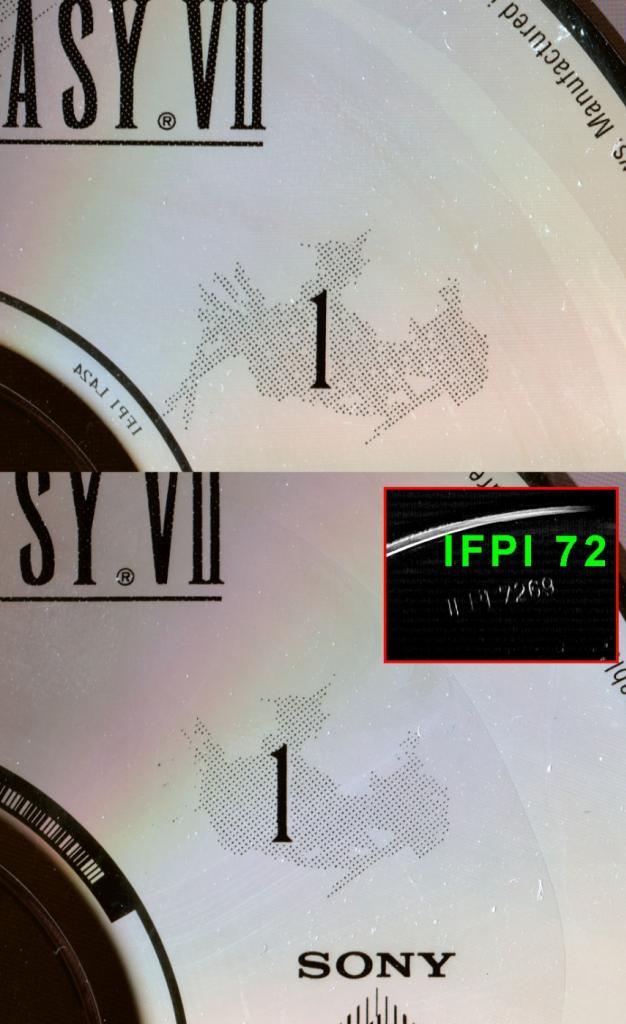 This next one is from a double Sephiroth error and contains multiple errors first is this one is missing page two from the manual and the manual wasn't properly cut. The first disc have a chocobo behind the 1 on disc was is improperly printed missing its feet and part of the tail. Hard to say why this happened or even if it's rare. it is listed twice on the site because they are two separate errors even though they happened to the same game they can easily happen separately.

The next error in line is a data error disc 3 containing Spongebob Squarepants Supersponge. There is only one of these that I know of out there but I'm sure there are others. Data errors happen when the master disc of another game is in the machine when they start making the discs of the game it becomes labeled as. There used to be a video which is long gone on this one. 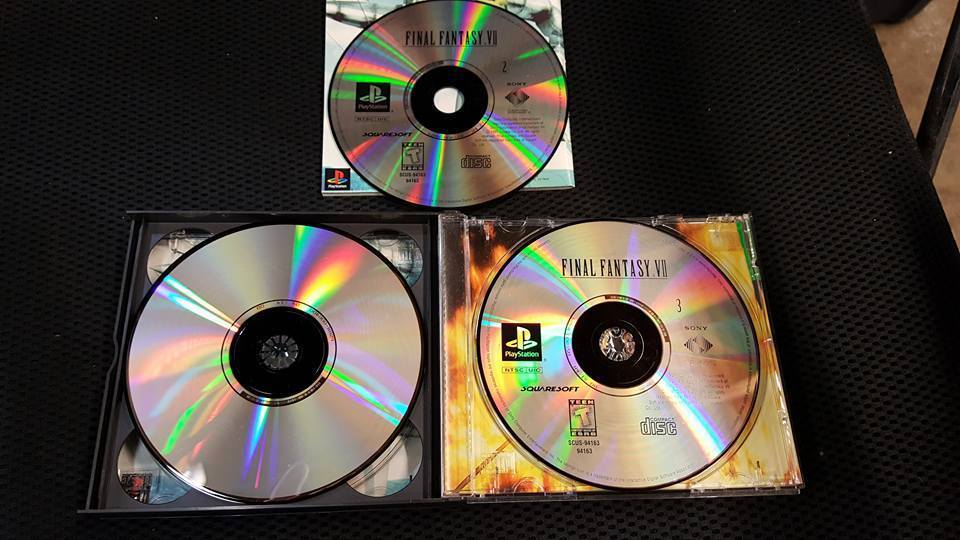 The final error for this game is much like disc 3 it contains no printing on the disc. it has the black entirely gone this time it's disc 1.

This game I would say has the worst track record for manufacturing. I'm sure that this game being in such a demand then and so many copies of it out there now i can see why the factories were pressed to get them out and quality control went on the wayside.